I went into Leeds with Alistair. We went to ID Aromatics. I bought some incense and tried to buy some Liquid Gold. That’s a drug you sniff and it gives you a real buzz for about 30 seconds. We both really wanted some so that we could get high at James’s. The woman in the shop said they didn’t sell it and she felt insulted that people think they do. She said I should be able to get it easily in gay clubs and sex shops. I couldn’t believe it I was so embarrassed. Then she said that she strongly advised me not to use it because it is very dangerous and totally shuts down the immune system. She was really nice but it has put me off using anything like that because you really don’t know what it will do to you. Alistair and I decided that we would pretend we had some at James’s party – more of that later.

Also when we were in Leeds we saw a man get arrested in Virgin for trying to nick some records or something. The security guard had to restrain the man. It was totally unreal. There were crowds of people watching. Then they got someone to get his legs so that they could take him down the stairs. His wife and kids started shouting, “Leave him alone you bastards! Fucking put him down!” It was awful. I mean I know I shouldn’t be snobby but it was very common and working class. Honestly it was like something you only see on the television.

James’s party was unreal too. We arrived at 7.45 and everybody else had already arrived and they were watching the video. Alistair and I went into a different room to get pissed. I had a can of this Special Brew stuff that Alistair had got. I couldn’t believe how strong it was. I only had one can of that and about half a bottle of Thunderbird, or maybe I had the full bottle I don’t know. It was so funny we were smacked out of our heads. Really I could barely walk. We lit joss sticks and a candle and stuff. Then Cathy arrived and she got pissed too. We were having a brilliant time and then they all stopped watching the video and came to see what we were up to. I was totally out of it and can’t really remember much of what happened except I was laughing at everything. We were dancing to my tape of Love Shack. Then James sort of asked us to go so we did.

We went to the graveyard and I was sick. It was horrible. Then I thought we’d better get back to James’s so I could have a glass of water. I puked then as well and I can’t remember what everybody else was saying and stuff. We eventually got to the Middle School with me puking on and off. Then I felt OK. We walked to the top of the village and all the way we sang songs about Tasha! Then I was sick again and then I really did feel fine and we played charades! God it was so funny! Because we were all so pissed we just got on really well. It was brilliant!

By the time we got home it was 1.45 in the morning. We walked back to the graveyard you see because I’d left a bag there that had my incense and stuff in it. God it was brilliant though. Even though I was sick.

I love David Sedaris. I first heard about him when I asked a friend what her favourite books were. She recommended Dress Your Family in Corduroy and Denim which is where I started. Since then I’ve seen him record his Radio Four show, seen him at his reading events and been able to share my favourite joke with him (resulting in me having to explain what a minge is). 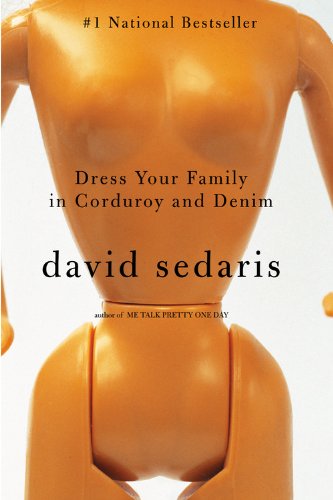 He’s extremely cheeky, candid, provocative and observant – seriously, what’s not to love?! He cleverly builds his stories keeping them tight and evocative. If you’ve never come across him, do check him out.

You’ll understand I was thrilled when he announced at one of his readings his next book would be his diaries. To be published as Theft by Finding, a title given to him by a friend on the basis that everything he writes about is taken from other people; what he’s observed  during a day, what people have told him (jokes, gossip, that kind of thing).

I couldn’t wait for June (the month not the person) when I’d be able to read them. And now I have.

They’re good, but not quite what I had hoped if I’m honest. I thought they’d leave me highly amused and knowing a bit more about him. And whilst they are candid they aren’t all that revealing. He’s honest about his drug and drink intake of the past and in the more recent sections (the diaries cover his life from the age of 20 to 46, 1977-2002) he does at times share his inner thoughts.

Mostly I enjoyed being able to read the verbatim playback of his time as an elf at Macy’s which went on to become the Santaland Diaries and his French lessons which became the title story in Me Talk Pretty One Day. His seemingly effortless rise to a celebrated published author was also really interesting.

What I enjoyed less was his documentation of the more sordid and unforgiving sides of human nature. The relentless abuse he’s subjected to in the streets, the rudeness and ignorance of strangers, the selfish and heartless way some people treat each other. Much of this I couldn’t see the funny side of.

As he shares in the book’s introduction each diarist finds their stride and what it is they particularly enjoy writing about. For him it’s recording everything he sees that interests him. Is that the same as what would interest you? If so you could well love this.

The book it pitched as part one. I’m already looking forward to part 2. I’m massively nosy after all.

This is my Amazon review of Alexander Masters’ book A Life Discarded… 148 diaries found in a skip (Yes that’s right! In a skip!)

I heard Alexander Masters talking about this book on the Radio 4 show ‘Front Row’. I was immediately intrigued; how had 148 diaries ended up in a skip? Who wrote them and why didn’t they look after their innermost thoughts and feelings more carefully? And if it wasn’t them who threw them out, why didn’t the person who did discard them care more about their content?

I have to admit that diaries, and the people who keep them, fascinate me (I follow the blogs and twitter accounts of those who anonymously share their old diaries with strangers). Diaries can be a comment on social history as well as the personal record of someone’s life, the things they do, what they think and how they feel. I also liked the idea that Alexander treated the process of trying to discover the author as a detective story. I don’t want to give anything away, because it would spoil the enjoyment of the book to know anything in advance, but will say he avoided some of the obvious routes that could have been taken and that made it much more interesting.

What I particularly enjoyed about the book was the personal way in which Alexander went about his journey and how he analysed the content of the diaries as well as the process and psychology of diarists. I found myself thinking about the diarist throughout the day, who were they, what happened to them? Did I like them or not? What did I think was the reason the diaries were thrown out? Who was ‘I’? Who was ‘E’?

Don’t want to say any more, so if you’re interested – read it! I’m really glad I did!

I gave it 5 stars, but as at today (30th July 2017) it averages 3.7 stars. It seems a lot of people were unhappy about his prose and the length of time he took to find out who the diarist was.

I’ve enjoyed looking back over reviews to see what other people made of it. Some of the reviews made me laugh, including this one from Tara which could just have easily been written by me!

I quite often find myself on eBay wondering whether bidding on tatty journals written in scrawling, often-illegible handwriting by people unknown is a good use of my limited funds.

I’ve never “won” one (yet). It seems a lot of other people are willing to pay far more than I have available for the honour of owning a little slice of someone else’s life.

I’m not sure what it is I think I’m going to find within their pages.

Maybe it’s because I wrote a journal consistently from the age of 18 until I was about 26 and then sporadically afterwards.

Perhaps there is an affinity with people who put pen to paper (so rare these days) to record their thoughts.

I know, though, that if I had found “148 tattered and mould-covered notebooks” lying among “broken bricks in a skip on a building site in Cambridge” I would have felt like I’d hit the jackpot.