This is my Amazon review of Alexander Masters’ book A Life Discarded… 148 diaries found in a skip (Yes that’s right! In a skip!)

I heard Alexander Masters talking about this book on the Radio 4 show ‘Front Row’. I was immediately intrigued; how had 148 diaries ended up in a skip? Who wrote them and why didn’t they look after their innermost thoughts and feelings more carefully? And if it wasn’t them who threw them out, why didn’t the person who did discard them care more about their content?

I have to admit that diaries, and the people who keep them, fascinate me (I follow the blogs and twitter accounts of those who anonymously share their old diaries with strangers). Diaries can be a comment on social history as well as the personal record of someone’s life, the things they do, what they think and how they feel. I also liked the idea that Alexander treated the process of trying to discover the author as a detective story. I don’t want to give anything away, because it would spoil the enjoyment of the book to know anything in advance, but will say he avoided some of the obvious routes that could have been taken and that made it much more interesting.

What I particularly enjoyed about the book was the personal way in which Alexander went about his journey and how he analysed the content of the diaries as well as the process and psychology of diarists. I found myself thinking about the diarist throughout the day, who were they, what happened to them? Did I like them or not? What did I think was the reason the diaries were thrown out? Who was ‘I’? Who was ‘E’?

Don’t want to say any more, so if you’re interested – read it! I’m really glad I did! 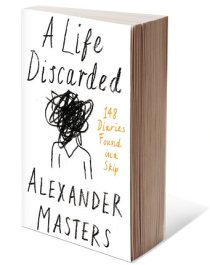 I gave it 5 stars, but as at today (30th July 2017) it averages 3.7 stars. It seems a lot of people were unhappy about his prose and the length of time he took to find out who the diarist was.

I’ve enjoyed looking back over reviews to see what other people made of it. Some of the reviews made me laugh, including this one from Tara which could just have easily been written by me!

I quite often find myself on eBay wondering whether bidding on tatty journals written in scrawling, often-illegible handwriting by people unknown is a good use of my limited funds.

I’ve never “won” one (yet). It seems a lot of other people are willing to pay far more than I have available for the honour of owning a little slice of someone else’s life.

I’m not sure what it is I think I’m going to find within their pages.

Maybe it’s because I wrote a journal consistently from the age of 18 until I was about 26 and then sporadically afterwards.

Perhaps there is an affinity with people who put pen to paper (so rare these days) to record their thoughts.

I know, though, that if I had found “148 tattered and mould-covered notebooks” lying among “broken bricks in a skip on a building site in Cambridge” I would have felt like I’d hit the jackpot.